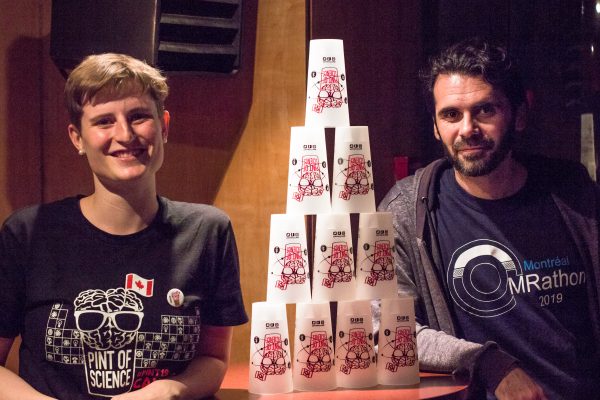 On May 22nd, as part of the worldwide Pint of Science Festival, people gathered at the Saint-Sulpice bar in Montreal’s Latin Quarter with a common goal: enjoy a nice cold beer while learning something interesting about research and cutting-edge science.

There to be part of the discussion was the co-chair of the CONP communications committee and professor at Polytechnique Montreal, Nikola Stikov. That evening, he was ready to make an impact with his talk entitled: “Open Science: With Great Data comes Great Responsibility”. Also present at the event was Estrid Jakobsen, the communications officer of the Quebec Bioimaging Network (QBIN). Together, they teamed up to create a presentation that would give an informative and stimulating experience for the audience!

For Nikola, the main goal of coming up on stage was to make people aware of issues related to access to publications, the interpretation of results and the evaluation of the quality of research publications. Nikola explained the replication crisis: published studies that are not reproducible. He stated that the impact of this issue goes far beyond the scientific community, reaching everyone. It brings out unfounded facts that can be misused and misinterpreted. It’s concerning!

Then, he introduced to the public two different ways to access a paper. The first one is the closed access model, where the scientists that wrote an article do not pay for its publication. However, the libraries, who make the articles accessible to the scientific community still pay for it, and they are financed by public money. The second one is the open access model, where the scientists pay to make their articles openly accessible. In that case, the scientists’ expenses are financed by grants. This money originates from the taxpayers. Thus, either way, public money is used to get access to researchers publications. The ones profiting from this model are the publishers. The publishers use free labor from the researchers and get an astronomical amount of money out of it. 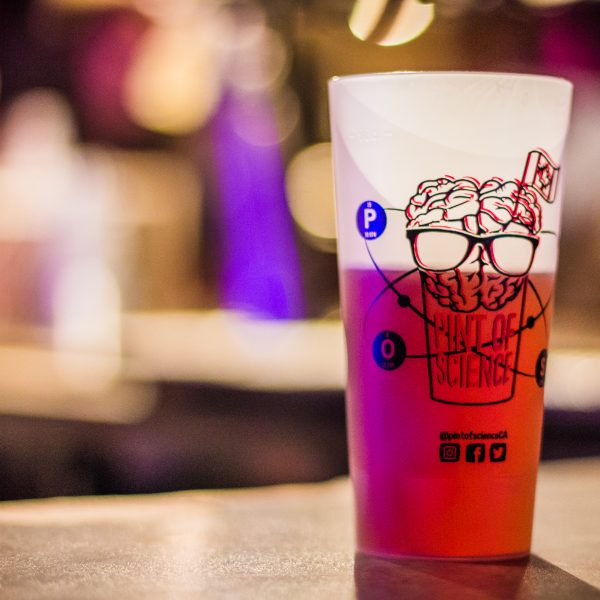 Another issue addressed by Nikola was the sheer number of research publications. Too many papers are being published and not enough data and code gets shared. The very word ‘paper’ is an anachronism in the 21st century, when many tools for sharing data and code are at our fingertips.

The main idea behind open science is to collaborate openly and to make research transparent. By making data (software, code, etc.) accessible, it would be possible to understand how it was processed and verify that the results are reproducible.

Nikola then demonstrated some of the many ways in which researchers across Quebec and Canada as a whole have become central to the promotion and implementation of open science practices, especially within the bio-imaging and neuroscience communities. He mentioned the Montreal Neurological Institute (MNI) as a leader in the open science movement and also spoke about PREVENT-AD, a recently-released Alzheimer’s disease dataset made openly available through the Canadian Open Neuroscience Platform (CONP).

The CONP is also behind NeuroLibre, a publishing platform supported by Compute Canada, making it easy to access the code used to produce interactive figures. This platform gives the user the freedom to reuse someone else’s work, but also to verify that the work is reproducible. Initiatives like NeuroLibre will likely prove especially useful to the bio-imaging community, in which research relies very heavily on computer-based data processing tools and analysis code.

Nikola ended his talk by sharing a key ingredient to help Open Science grow across scientific organizations: “For something to gain traction, we need to build a community. […] And the nice thing is that, at least with imaging, we are a small community. […] This means that we are in a position to steer the conversation!” With imaging, it’s possible to gather a critical mass of people around a shared vision. This encourages discussion which leads to generating original ideas, getting people involved, working on new projects and, therefore, pushing the movement further. The results of such a contribution draw the path for others to overcome the present barriers.

The CONP would like to say thank you to everyone who contributed to this event. It was a great pleasure to be part of the Pint of Science Festival.